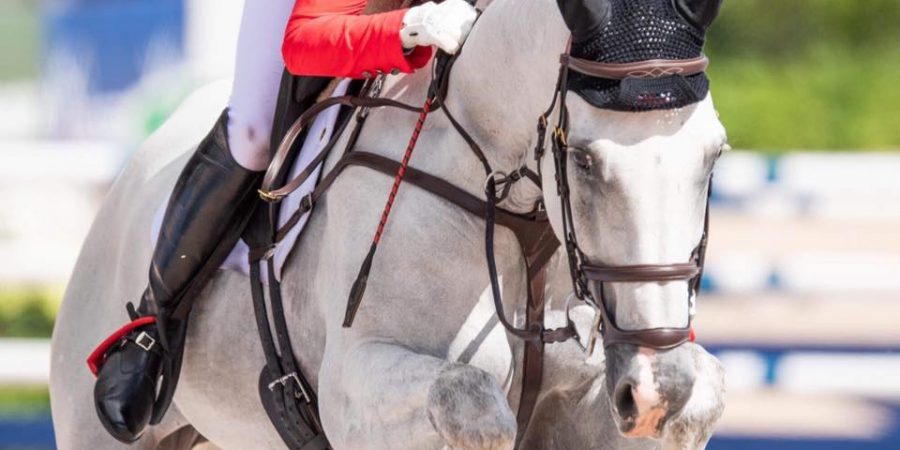 The going at the Bromont CCI** in Bromont, Quebec was slightly heavier than John Williams expected and slowed him and Sweepea Dean just enough on cross-country to add 5.2 time faults to his dressage score, dropping the pair to second place. This allowed local competitor Colleen Loach to take the lead riding Peter Barry’s 11-year-old Irish Sport Horse, Longfield Dougal.

“The course was challenging but flowing,” said Loach, 24. Of her horse, she commented, “He was really on and rideable today.” Loach has been riding the gelding since last summer; he was imported from Ireland by Barry and sustained an injury shortly after his arrival in Canada, so Loach is the first one to compete him here since his time off.

Loach is an accomplished rider and rides horses for Barry as she is working towards becoming a professional herself. She has competed to the three-star level at the Foxhall Cup with Dare to Compare, her first horse, who she rode from pre-entry up to the three-star level. The 19-year-old gelding, still owned by Loach, is competing at Bromont this weekend with Erika Kocze in the CCI*.

Loach is also competing Rising Spirit, a five-year-old homebred belonging to Barry, in the mare’s first training level event this weekend. The mare was in fourth place after dressage but time faults cross-country put her out of the placings in the large division.

Phillip Dutton is third in the CCI** on Loose N’ Cool, owned by Nina Gardner, and is currently in the lead in the CCI* on Mighty Mangaroo, owned by Ann Jones. Loose N’ Cool won the Intermediate at Southern Pines this spring and has had successful competitions at Plantation and Fair Hill as well this spring. This was the horses’ first two-star competition and Dutton said that it was a big test for the chestnut gelding. “It was the longest and hardest he’s done,” said Dutton. “He’s not the fastest horse but he’s easy to ride so we didn’t waste any time.”

Mighty Mangaroo is a newer ride to Dutton – Boyd Martin, of Dutton’s native Australia, imported the gelding to the United States after the horse had competed to the Novice level in Australia – equivalent to the North American preliminary level. Like Loach’s horse, Mighty Mangaroo was injured shortly after his arrival on this continent and had time off to recuperate, so this is only his fourth competition with Dutton.

“He’s an Australian Thoroughbred, six years old, and he’s a very good galloping horse,” explained Dutton. “I’m quite excited about him – he’s a good jumper and he’s quite. This was a hard test for him, but in a good way. It was tiring for him, but he got more confident as he went around.”

Shawn Price and Jack The Lad took the lead in the CIC** when overnight leader Peter Barry had an unfortunate two refusals at only the fourth fence on course with Jefferson D’Aurois. Stephanie St-Pierre, who was second after dressage, also had two stops on course. Martha Griggs and Gregory moved into second and Diana Burnett is third on Manny.

In the CCI* dressage leader Brandon McMechan had two stops and posted 30.8 time faults, allowing Susan Berrill and Welton Hvala to take the lead. No one in this division was under the time allowed. Young Rider Carroll Courtney is second on Karoo and Ariel Grald is third on Practically Perfect.

Meghan Baille and her handsome Irish horse Stryker are leading Open Training, while Etienne Souske and Noah lead the Junior Training. Organizers were pleased with the successful day of competition over the newly renovated cross-country course, with a great deal of work by course designer Derek diGrazia and builder Jay Hambly and crew. Technical Delegate Peter Fell of Ireland said, “The event is taking a very good direction. Derek is spot on – the track was beautiful, and the venue is superb.”

Organizing Committee member Charles Baudinet said that the event’s success is due to a lot of work and dedication from the staff and volunteers, not least of all show organizer Sue Ockendon. He pointed out that Bromont is a special event because much of this effort is made in the memory of Todd Sandler, to whose memory the competition is dedicated. “Todd was a special person and an up-and-coming eventer” said Baudinet. “This event is really about the Young Riders and building a future for eventing in Canada.” The competition concludes Sunday with show jumping.